As every cannabis consumer knows, our society carries a stigma against cannabis, avoiding and handicapping its social acceptance, so scientific research, even regarding its medical effects, was almost hidden. Hopefully, research on its alleviating and therapeutic effects is increasing, so, currently, social inertia aims at greater acceptance; some American countries have legalized it, it’s medically treated, and featured in social media, like movies or series. 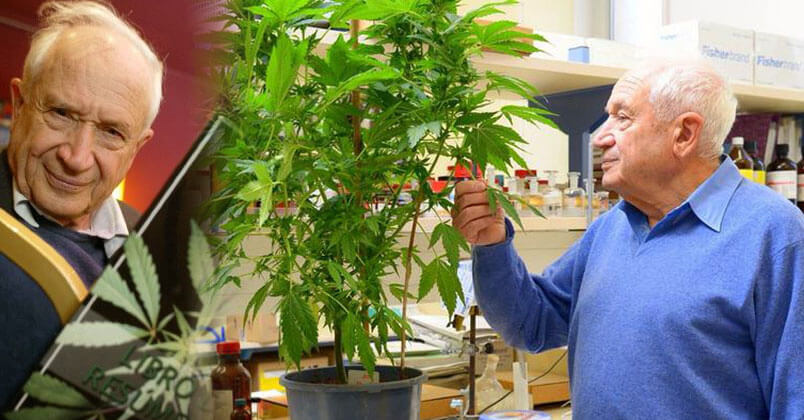 This way, Professor Raphael Mechoulam has stated an outstanding breakthrough; scientific community has achieved remarkable information, thanks to his research on cannabinoid medical properties in human body.

Raphael Mechoulam is one of the top cannabis scientific researchers. This Israeli professor teaches chemistry and natural products at Hebrew University of Jerusalem, and has dealt with many projects which have extensively enhanced the scientific knowledge on marijuana and its chemical elements. He focuses on THC and endocannabinoid system; next, we’re going to deal with his research, professional awards and other oddities: first of all, we should undertake an overview of his life – we would properly understand this cannabis researcher.

Raphael Mechoulam was born in Sofia, Bulgaria, on November, the 5th, 1930, within a wealthy family. His father was a director of a Hospital in Sofia, and his mother belonged to a wealthy Berlin Jewish family, so Mechoulam joined a good North American-system school till the age of 11, in 1941, when his family was forced to abandon Sofia due to Bulgarian annexation to Axis Powers; with Bulgaria being annexed to the Axis, led by Nazi Germany, anti-Semitic laws were stated, and Jewish started to be chased: a clear example’s Mechoulam’s father, sent to a concentration camp, although, hopefully, he survived.

In 1949, he migrated, together with his parents, to Rehovot, in Israel; in 1966, a year before Six Day War, he definitely moved to Jerusalem. Then, he started studying chemical engineering, although he quit it to study chemistry – future remarkable research.

Then, he started researching on cannabis science. He also researched on insecticides for Israeli army. In 1950, he finished his PhD on steroid chemistry, mentored by the professor Franz Sondheimer, before moving to the U.S.A., where he did a postdoctoral residency with the science professor William S. Pelletier, at Rockefeller Institute. Later, he joined Weizmann Institute of Science in Israel, becoming the youngest professor in the university.

Raphael Mechoulam focused on isolation and determination of the structure and total synthesis of Δ9 molecule – tetrahydrocannabinol (THC), one of the main active ingredients in marijuana plant or cannabis sativa; besides, he worked on endocannabinoid system, the group of endogenous cannabinoid receivers, found in the human brain and other mammal brains. This is key research, but, what about his origins? How did this Jewish professor focus on these scientific projects?

It all started when, as a member of Machon Weizmann, he decided to isolate, structurally elucidate and totally synthesize Δ9 molecule – tetrahydrocannabinol (THC), main active cannabis ingredient. His research became so well-known that he was hired as a full professor of medical chemistry at Hebrew University of Jerusalem, creating the Department of Natural Products.

Since then, more than 350 scientific articles have been published, mainly on THC isolation, cannabinoids, anandamide and 2-AG or araquidonilglicerol.

In addition, his works have guided other researchers on endocannabinoid anandamide isolation. This cannabis receiver’s produced by animal organisms, like the human body, and it was firstly featured in 1992 by two Mechoulam’s postdoctoral researchers: Lumír Ondrei Hanus and William Devane.
Shimon Ben-Shabat, Mechoulam’s PhD student, discovered 2-AG, another unknown endogenous cannabinoid.

These are some specific discoveries, but, generally, Mechoulam’s cannabis-research breakthrough’s wide, diverse and remarkable – human understanding on historical development of pharmaceutical products and other more natural remedies (as well as cannabis consumption in ancient times) has been spread.

Raphael Mechoulam achieved a chair at Hebrew University in Jerusalem, in Israel, and he has reached acknowledgment and many awards, becoming an outstanding international scientist.

Ulf von Euler Lecture of Physiology, David Bloom of Hebrew University in pharmacologist research, Israel of Chemistry, Heinrich Wieland and Sachs at Weizmann Institute of Science for Advanced Scientific Research. There’s an award by the International Association of Researchers on Cannabinoids (IACM), which holds Mechoulam’s name since 1999: Annual Mechoulam Award in Cannabinoid Research. In 2012, he was given the Rothschild Award due to his research on the effects of natural chemical substances on human behavior.

Currently, he’s an 87-year-old teacher at Hebrew University in Jerusalem, and his works have been quoted in more than 45,000 projects – his research’s the official basis for future cannabis scientific discoveries.

Previous ArticleCOFFEE GROUNDS FOR YOUR MARIJUANA PLANTS, IS IT GOOD?Next ArticleHOME REMEDIES FOR PESTS IN PLANTS