Ketama’s the traditional name of Issaguen, a village in the region of Taza-Alhucemas-Taunat, in a North African area called Rif. At the foot of Jebel Tidighine mountain (2,457 m), in Rif mountain range, there’s one of the biggest and exuberant cannabis plantations in the world; more than 55,000 hectares, based on marijuana growing, make it the world cannabis growing epicenter. 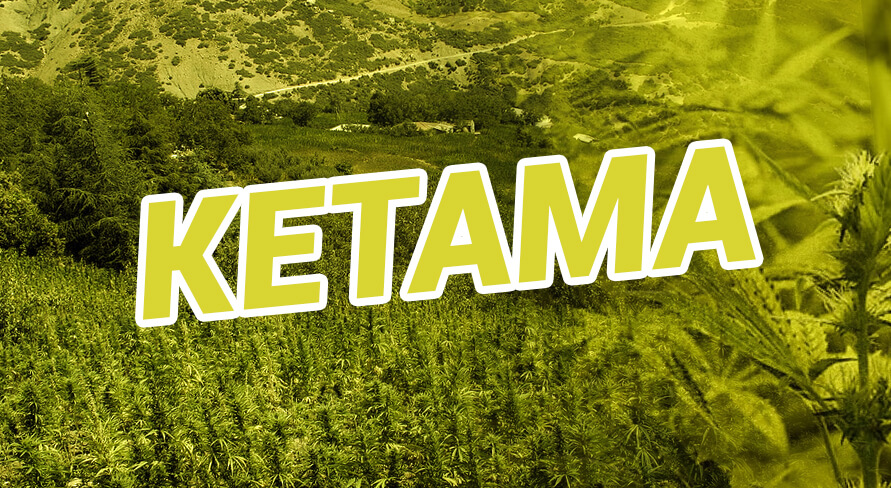 Many cannabis consumers get interested in the huge fields of this region; let’s mention what to see and how to reach Ketama and its fields. Ketama village’s 112 km far from Alhucemas; precisely, it’s at a crossroads, 107 km from Chauen, 167 km from Tetuan and 79 km from Taunate.

Alhucemas is a coastal town in northern Morocco, two-hour drive from Issaguen and its cannabis fields; cheap trip for the most unusual landscapes – for marijuana consumers/growers, the vast extents of these cannabis fields are an astonishing, kind of utopian view: just visit one of the most mythical cannabis icons.

Back in the days, Ketama was a little village where tourists were accommodated to practice ski or trekking; nowadays, tourism has been gradually substituted by cannabis growing, the main economic engine in the area. Traditionally, cannabis growing has been present among retailers; however, it’s currently grown in wholesale terms, producing enough cannabis to provide European hash consumption.

Cannabis growing in Ketama has been traditional, even officially supported; however, current international pressure made official guidelines change strictly. Anyway, the real situation hasn’t changed. National policy against cannabis growing has reduced its hectares, but they haven’t been reduced in Rift. In fact, marijuana hectares are increasing in the area gradually; logic, because the locals live on hash trading and, without any other way of living, they wouldn’t deal with national policy. Besides, the government’s not totally interested in avoiding this business, because the legal changes seem some breathing space, playing to the gallery.

What to see in Ketama

From the north, unity route, from Ketama and Fez, about 150 km, from northern Morocco to Rif mountains. This route’s one of the most important symbols of Moroccan independence, and you can enjoy the extraordinary views of the crossing landscapes.

From Ketama, you can visit mount Tidirhine, which, along winter months, tends to be covered by snow, being available to ski. In fact, its summit has the best Moroccan ski station. During hot months, you can hunt wild pigs, or just go trekking. Ketama’s in Rif mountain range, a specially mountainous region, full of green spaces, with interesting geography, history and landscaping; besides, the main foreign language’s Spanish.

In Ketama, you can visit its Spanish area; Sacred Heart church, Regulars Headquarters or Spanish Institute.

There are some nearby towns such as Chechauen and its leather/textile companies, Al-Hoceima, Aïn-Aïcha, Taunate and its market, Tissa and its October horse fair, or Rafsaï and its olive festival, in December; undoubtedly, cannabis fields are remarkable in the area.

Generally, the 57,000 Moroccan cannabis growing hectares are in Ketama.

When reaching on top of the cliffs, you can notice never-ending fields; they’re gradually increasing through the years, across stiff and arid zones. In fact, cannabis grows are so abundant that, generally, they have become the only growing in the area; mainly, the growers focus on indica marijuana.

The huge grows in the region call millions of tourists’ attention every year, enamored when observing the vast extents of green fields full of bud cups shining to the sun – visual delight, difficult to forget for cannabis consumers.

Gea Seeds warns you to be careful, discreet and quiet, because the area’s full of mafias controlling the growings. Generally, difficulties come from police controls on the road, trying to fine the tourists with possible hash from the area – this doesn’t persuade tourism (increasing visitors in this incredible, charming, famous region).

Although shocking for regular marijuana consumers, almost the whole crop in these valleys is focused on hash elaboration; the uncountable annual hash tons provide Maghreb and European hash consumption. Hash enters Europe by sea, through Gibraltar straight; generally, through the Mediterranean coast, mainly through southern Iberian towns, like Cádiz, and, secondary, through other French and Italian ports. Then, hash follows a northern route, passing through some controls and frontiers, being finally consumed in some of the most famous Dutch coffee-shops.

The process starts with vine growing; when bud cropping, the crops are stored to be dried and healed. In cold winter, marijuana’s taken out of drying storerooms to extract the resin – much easier fallen off from the bud when it’s cold. Then, the buds are placed on bowls covered by sieves, and it’s all wrapped with huge plastic bags. Next, marijuana’s tapped with a stick, like drumming, so the resin falls onto the bottom of the bucket, and the resin’s extracted from the dried buds.

The final result’s a yellow product which contains the resin of the buds, combined with some material traces of the flower. Then, that material’s hot pressed or cold baked, producing hash of different qualities, colors and textures.

You can have a look at the following post:

HOW TO MAKE HASH

Previous ArticleMARIJUANA LEAVES, CANNABISNext ArticleKUSH, CANNABIS STRAIN – WHAT IS IT? HOW CAN YOU GET IT?