It is frequent when buying a package of cannabis seeds some acronyms appear. In many occasions the consumer does not know their meaning. These acronyms refer to the type of seed according to its genetics, so depending on the type of seed, being of the same variety, we can expect different results.

The creation of the various types of seeds comes from Mendel’s Laws, which enacted the basic principles on the transmission of genetic inheritance (principles in force in the creation of cannabis seeds). 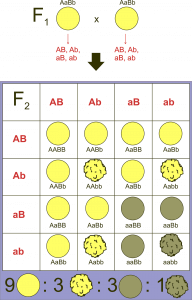 This principle has allowed seed banks to create an infinite number of strains, accentuating the desired traits of each of the parents. Therefore, we can now find different varieties on the market that adapt to the preferences of each one.

Identifying this nomenclature to be able to choose the seeds that best suit us and to know the possible results that we can obtain from each one is important when making our purchase.

The acronyms and types of seeds we can find are:

They are the pure varieties, native to a given area and have never been crossed. They are part of any of the three great Cannabis families: Sativa, Indica and Rudelaris. These varieties are characterized by being very homogeneous between them and have very similar characteristics in their growth and flowering patterns. All the cannabis strains come from one of them.

IBL seeds are named after the English word InBred Line. These varieties come from the crossing of plants with a very similar genotype and a long stabilization process, so that the IBL seeds are highly stabilized plants, which have only been crossed with themselves, so they have very homogeneous features.

F1 seeds are the result of the crossing of two different pure or IBL varieties. The offspring of these two parents are relatively homogeneous and possess so-called’hybrid vigour’, i.e. plants from F1 seeds will have the most desired characteristics of each of their parents and will probably be more vigorous and productive than them.

F2 seeds are the result of the crossing of two F1 varieties. The plants from these seeds are more heterogeneous as they have characteristics of the father, mother and both simultaneously. These plants lose the hybrid vigor of the first generation.

When F2 individuals are crossed between them, F3 seeds are obtained and so on simultaneously.

BX seeds are the result of the crossing of an F1 specimen with one of its parents to accentuate some characteristics of one of the parents in the offspring. You can repeat the process and get BX1 and so on simultaneously. This method is often used to obtain seeds from a female clone that is not owned by the parents.

S1 seeds are obtained by reversing the sex of a female plant and crossing it with itself to obtain seeds. Plants from this type of seed will have features very similar to those of the mother.